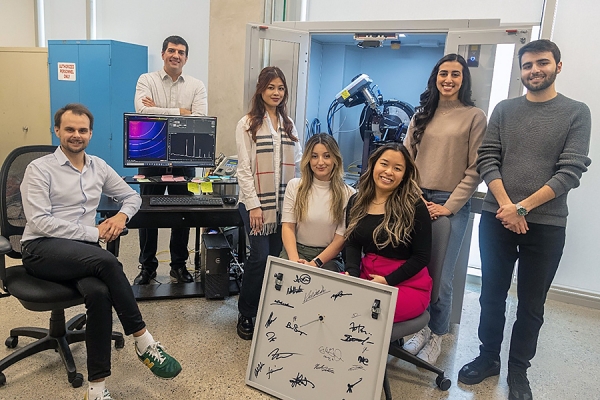 An industrial partnership between Proto Manufacturing and the University of Windsor has resulted in the development of a cutting-edge scientific instrument for the discovery of new solid materials.

The system uses X-rays to rapidly test small amounts of materials, such as pharmaceuticals, chemicals, minerals, and nanomaterials. The team, spearheaded by chemistry and biochemistry professor Nick Vukotic, filed a provisional patent around the design of a new instrument in early 2022.

“The partnership we have with Proto is truly unique in that it has both a local and global impact,” says Dr. Vukotic.

“Locally, it enhances the research capabilities of the University, creates jobs, and provides an excellent training environment to students who get to use the newly developed equipment. Globally, it gives academic and industrial researchers everywhere new tools to speed up their research and reduce the time required to make ground-breaking discoveries.”

Proto is a high-tech scientific instrument company which builds X-ray diffraction equipment for materials testing. The newly developed system, called the High-Throughput Laboratory Powder Diffractometer (LPD-HT), has shown such a significant increase in performance that the company has already added the instrument to its product line and plans to build them in its new production and research and development facility in LaSalle.

The system, which is expected to retail for over half-a-million dollars, brings Proto a significant advantage in the competitive global market of high-end scientific instrumentation, says company president Mike Brauss.

“It is a significant advance in our X-ray diffraction technology,” he says. “We are excited to commercialize the system, as the production and sales of these instruments will lead to new jobs in the Windsor-Essex region.”

Vukotic holds an Industrial Research Chair in X-ray Diffraction and Crystalline Materials. He says the project advanced from being just an idea when he joined the University faculty in 2019: “Now seeing it built and working as we hoped is just tremendous.”

The instrument operates 100 times better than previous campus instruments, allowing researchers to collect data 10 times faster on a very small amount of sample, just 10 per cent of what was previously required.

“Our ability to test very small quantities rapidly and obtain high-quality data means that researchers can quickly find out if they are on the right track, saving valuable time and resources,” Vukotic says. “Previously, we could only run around 20 samples in a day. Now if we want to, we can do over 500; it’s quite amazing.”

The instrument will become the cornerstone of a new materials discovery facility which will be open to other universities and interested companies and partners. The team anticipates significant interest from companies working on everything from pharmaceuticals or nutraceuticals formulations to environmental companies interested in soil analysis.

The facility is run by Anton Dmitrienko, a member of Vukotic’s research team who helped develop the system and works within the Advanced Materials Centre of Research (AMCORe) at the University of Windsor.

The newly developed system contributes to AMCORe’s world-class facility and gives researchers the tools to develop the next generation of advanced materials for improved medications, sensors, and to push the bounds of nanoscience and nanotechnology.

Other members of Vukotic’s team, such as graduate students Joy-Lynn Kobti, Ali Baranbo, and Michelle Dao, have already begun to use the system for rapid screening of new controlled drug-release materials which could lead to improved medical treatments and therapies.

The next stage of the project involves developing accessories for the system to help identify unique materials, such as those that can capture greenhouse gasses like carbon dioxide. Fuelled by the success they have had so far, Vukotic’s team expresses excitement for what future developments will bring.