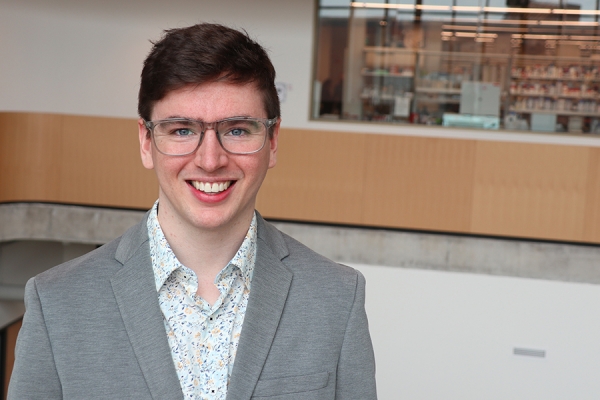 Synthetic chemist Joseph Zurakowski has won a Vanier Canada Graduate Scholarship. As a Vanier Scholar, the doctoral student has demonstrated leadership skills and a high standard of scholarly achievement in graduate studies.

These awards are competitive — this is the first to be awarded to a UWindsor Faculty of Science student in over 10 years, and Fallon Mitchell is the first-ever recipient in the Faculty of Human Kinetics (see related story).

“I believe it takes a city to raise a person and between my family, my partner, and my supervisors, this news is incredible.”

The Government of Canada launched the Vanier scholarship program in 2008 to strengthen the country’s ability to attract and retain world-class doctoral students and establish Canada as a global centre of excellence in research and higher learning. Awardees receive $150,000 over three years.

After completing an undergraduate degree at Carleton University, Zurakowski started his doctoral studies in the laboratory of Marcus Drover, professor of chemistry and biochemistry, where he focuses on designing new molecules for green energy applications.

“We have a lot of challenges to face regarding the environment and sustainability and I am hopeful of the research everyone is doing,” Zurakowski says. “I’m going to be part of that story.”

For his Vanier scholarship-funded work, he will be working on using ammonia as a fuel source. Zurakowski says this is a relatively new field of study with great promise.

“Ammonia is produced for fertilizer use on a massive scale. Using it as a fuel source would benefit from our current production capacity,” he says.

His research will revolve around creating new catalysts using iron compounds that can transform ammonia into dinitrogen, releasing the energy stored in its N-H bonds to power everyday items, such as vehicles, cars, and even large container ships. This fuel alternative is particularly relevant as it emits no carbon dioxide when it is burned, representing a sought-after option when compared to petroleum-based fuels such as gasoline.

“The number of molecular complexes that can oxidize ammonia are few and far between, plus the actual chemical pathways that occur when ammonia is oxidized are complex,” says Zurakowski. “Opening new design space in this burgeoning area represents a real challenge.”

The award also encompasses leadership qualities. Zurakowski was a member of the Science Student Success Centre at Carleton University where his efforts were aimed at the transition of youth into the university environment, providing opportunities to advance social well-being and student mental health.

At the University of Windsor he was the first graduate student in Dr. Drover’s lab.

“As the first graduate student, I took on a leadership role in the lab from the get-go and I have mentored a number of students, co-authoring several papers together,” Zurakowski says.

“It’s fun training people and giving them the confidence to do chemistry wherever they go — that is my goal.”

Drover credits Zurakowski with advancing the work of his lab.

“It is no doubt a consequence of Joey’s academic prowess, drive for research, and leadership that my group was able to rapidly expand its capacity through accelerated discovery and through the mentorship of several junior personnel,” he says.

Zurakowski says his work has benefited from the supportive group atmosphere and world-class research facilities at the University of Windsor.

“UWindsor has phenomenal facilities and I get to be hands-on. From the NMRfacility to X-ray crystallography and many other spectroscopies, I have been trained on many of the instruments and run all my own experiments.”

“Joey was the first student to join my program here at the University of Windsor and he has been an absolute star — this is only the beginning, so watch out,” says Drover.

“His receipt of this award shines light on the high quality of graduate students here at the University of Windsor, and moreover, cements the Department of Chemistry and Biochemistry as a destination for world-class training in the fields of inorganic and organometallic chemistry.”