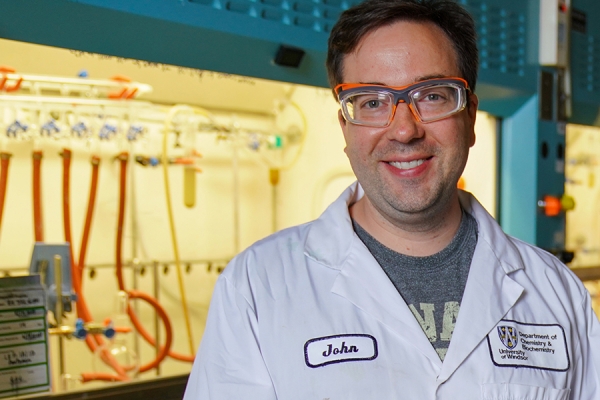 John Trant has been awarded a $120,000 grant through the Cancer Research Society

to devise a new way to diagnose prostate cancer.

Oncologists may soon have a new tool to outsmart prostate cancer thanks to research by UWindsor biochemistry professor John Trant.

“We are developing the next generation of imaging probes so clinicians can quickly determine the location of the tumour and help determine if the cancer is progressing from one stage to another,” Trant said.

Trant’s research got a $120,000 funding boost last week from the Cancer Research Society, a registered charity that raises money for Canadian cancer research. The society announced $9.6 million in funding for 80 projects around the county. Trant’s was one of two UWindsor projects that received funding. The other is breast cancer research led by biology professor Munir Rahim.

Prostate cancer generally begins as hormone-sensitive adenocarcinoma, a disease that can be treated by reducing the body’s production of testosterone and other hormones, Trant explained. But the cancer can evolve and become resistant to the treatment. A second line of therapy can be used, but the cancer can evolve further into an even more aggressive form.

Zeroing in on a specific protein associated with the disease, Trant is developing a pair of probes that attach themselves to the protein, allowing doctors to distinguish between prostate cancer that is hormone sensitive and prostate cancer that has become resistant to treatment.

The agents Trant is developing would fluoresce under near-infrared light. Doctors could use a lamp that emits such light during colonoscopies to detect the agents. Diagnoses would be more precise and wait times shorter than with current imaging, which uses positron emission tomography, commonly referred to as PET scans.

“This would be much more readily available, and we could cut costs dramatically,” Trant said.

His research, started with UWindsor biomedical researcher Lisa Porter, received initial funding from the Windsor Cancer Centre Foundation’s Seeds4Hope program. The latest funding through the Cancer Research Society will allow the team to expand its research over the next two years and collaborate with clinicians at cancer centres.

Since its inception, the Cancer Research Society has invested $326 million in cancer research.

“As a leader in the field of cancer research in Canada, the Cancer Research Society is determined, now more than ever, to contribute to preventing, detecting, and treating all types of cancer as demonstrated by the success of our annual grant competition,” said president and CEO Manon Pepin. “Each donor and partner can be sure that the donations collected will have a major impact for patients diagnosed with cancer, as well as for their loved ones.”