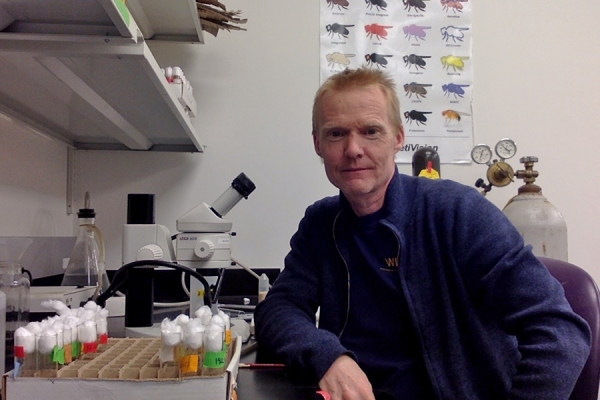 Biology professor Andrew Swan has been awarded a $30,000 grant

to study a protein associated with cell growth in hopes of identifying treatment for cancer.

The tiny insect attracted to overripe bananas and discarded apple cores is being used at the University of Windsor to unlock one of the mysteries surrounding cancer in humans.

UWindsor biologist Andrew Swan is using fruit flies to study a protein that holds cell division in check. The protein, called tuberin, is the product of a tumour suppressor gene in our DNA. It’s been established that tuberin is related to cell growth, but Dr. Swan says its role in mitosis, or cell division, requires further study.

“This is where we come in,” said Swan. “Our collaborator, Dr. Elizabeth Fidalgo Da Silva from Dr. Lisa Porter’s lab, found that tuberin has some responsibility in mitosis as well and we want to see if this protein is playing the role we think it is. If we’re right, this could represent a druggable target for many human cancers.”

Swan has been awarded a $30,000 research grant through the Windsor Cancer Centre Foundation’s annual Seeds4Hope program. It will fund his research for the initial year of what he envisions could be a five-year project.

Organ and tissue growth in humans involves two phenomena: cell division and cell growth. Cell division is how cells proliferate. Cell growth is how cells increase in mass, largely through the production of proteins. In healthy development, both of these phenomena are carefully controlled, Swan explained.

“The misregulation of growth and proliferation are two critical hallmarks of cancer,” he said. “Tuberin is a tumour suppressor protein that lies at the heart of cell and tissue growth regulation.”

Fruit flies have cancer genes just like humans do. By experimenting on the tiny insects, Swan hopes to identify how tuberin can be used to design drug therapies for cancer treatment.

“Fruit flies are one of the best model organisms for looking at cell growth and cell division,” he said.

Swan’s project is one of three UWindsor cancer studies being funded by the Windsor Cancer Centre Foundation this year. The foundation’s Seeds4Hope program provides start-up funding for locally based cancer research. The goal is to bring together local scientists and physicians to find better ways to prevent, detect, diagnose and treat cancer.

Graduate student Adam Pilon is working on the project. Swan said the funding will allow him to bring another researcher on board. In addition to research outcomes, the project provides hands-on training opportunities for UWindsor students.