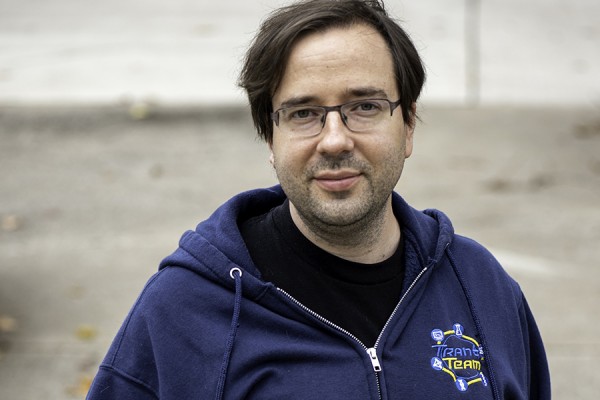 Using zebrafish as test subjects and rust as a secret weapon, Dr. Trant is designing a benevolent Trojan horse that can sneak through the brain’s defence systems and deliver drugs to glioblastoma tumours.

He is setting out to see if he can attach a nanoparticle to a specific protein naturally occurring in the body. When receptors in the blood-brain barrier let the protein in, they will inadvertently open the door to Trant’s nanoparticle, too. Once inside, the iron oxide in the shell of the particle can be triggered with magnets to disintegrate, releasing the cancer-fighting agents inside.

“One of the reasons glioblastoma is so deadly is because we can’t get drugs into the brain to treat it,” said Trant. “One of the ways to currently do that is to cut your skull open and deposit wafers of drugs into your brain. Then they seal you back up and hope the wafers contain enough drugs to kill back the cancer.”

Post-operative treatments include radiation and chemotherapy which adversely affect patients’ quality of life because they don’t target only the tumours.

Trant hopes to come up with an alternative treatment that someday will be available by injection or nasal spray.

He has received a $50,000 grant from the Brain Tumour Foundation of Canada to begin his research. He is dedicating two full-time researchers in his lab to the project and hopes to prove the viability of the concept within a year. Further research would be needed to make the treatment available to glioblastoma patients.

Glioblastoma, also known as glioblastoma multiforme, is the most aggressive form of brain cancer. It has a low survival rate. It’s the cancer that claimed the life of Gord Downie, lead singer of the Canadian band The Tragically Hip.

The blood-brain barrier has posed a daunting challenge to researchers. It forms a seal around the brain to protect it from viruses and bacteria.

“What we want to do is hijack a few mechanisms that are on that blood-brain barrier to help get drugs across,” Trant said. One of those mechanisms are receptors that allow specific proteins to enter from the bloodstream.

The particles Trant is proposing to introduce to the bloodstream and piggyback onto the proteins are 1/10,000th of a millimetre in diameter.

While other scientists have done similar research, Trant’s approach is novel in that it relies on a modified form of liposomal nanoparticles, soft particles made up of fats, that his group has designed to be perfectly stable until magnets are used to make them disintegrate on command. Under the magnetic field, created by the patient donning a magnetic helmet, the rust Trant will imbed in the shell of the nanoparticles will heat up to 3,000°C, causing it to break apart into benign biomolecules.

The heat generated will be so exceptionally localized, it will not adversely affect the drug in the nanoparticle nor any of the human tissue around it. The temperature change would be completely imperceptible to the patient.

“We can get the best of all worlds,” Trant said. “We can make a polymer that is super-stable and that doesn’t change until you want it to. When you trigger it, it falls apart completely and opens up and releases stuff. We can put drugs in there, we can target them for the blood-brain barrier, we can get them across the blood-brain barrier and, between the time they are introduced to your bloodstream and they get into your brain, they’re not releasing the drug.”

The zebrafish is often used in health research because it has a similar genetic structure to humans. The minnow-like fish is transparent, allowing researchers to use dyes as a visual cue to ensure their therapies are targeting the intended tissue.

UWindsor biology professor Lisa Porter, a founding director of the Windsor Cancer Research Group, uses zebrafish in her research, Trant explained. Trant and Porter often collaborate, and Trant will use the aquarium in Porter’s lab for his glioblastoma research.

If successful, Trant’s nanoscopic delivery system could be used to carry other things, like genetic material, radioactive elements, other drugs, or dyes that can be used to fight other diseases, too.

“Dr. Trant’s research is an example of the ground-breaking work taking place at the University of Windsor,” said K.W. Michael Siu, vice-president, research and innovation. “This is his first research project funded by the Brain Tumour Foundation of Canada and we wish him great success.”