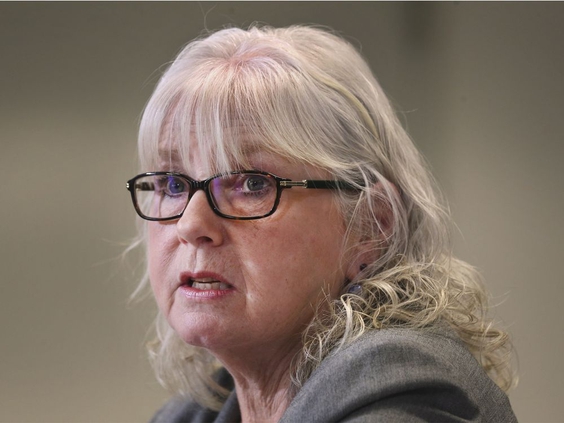 where she told reporters a physician that works within the organization

Managing an ever-changing message around COVID-19 was one of the biggest challenges at Hotel-Dieu Grace Healthcare during the early days of the pandemic, the facility’s CEO told a virtual audience Wednesday.

“I stopped being the chief executive officer and I kind of became the chief communication officer,” said Janice Kaffer, who worked in the hospital units almost every day with frontline staff.

Interviewed following the We Spark Health Institute online speaker series where Kaffer spoke, she said at times initially in the pandemic there was uncertainty about what was true and what was not around the novel coronavirus.

“There were several times in the early days where we would get direction or we would get information and then in the morning we would put that out in a memo,” she said. “Then by the afternoon we would have to go out to the staff and say, ‘Disregard that first memo, this is the newest information.’

“I think we did frustrate our staff with a lot of it.”

And that frustration led to some tough questions regarding whether leadership knew what they were doing.

“And we had to answer those questions. There were some challenging conversations,” Kaffer said. “We didn’t always 100 per cent know what we were doing. And that’s the truth.”

That difficulty was compounded by a barrage of information online and on social media, plus what was happening in the United States where the response to the pandemic has been very different.

And despite having preparedness plans, “I don’t think anybody was fully prepared for this particular virus,” Kaffer said. “The nature of the transmission, the speed, the lack of information on how it spread.

“We prepared and we acted as though it was worse than we knew it was at that moment. And that actually served us quite well.

Kaffer said she still does rounds throughout the facility and holds virtual meetings with teams — now on a monthly basis rather than daily, which happened during the early days of the pandemic.

As well, a renewed emphasis on communications with patients and families grew out of the early struggles.

One of the first priorities as the pandemic unfolded was to keep patients safe. Healthcare facilities were locked down across the province.

But that led to other issues.

“It kept them physically safe but it really did have an impact on their spiritual, psychological and their emotional health because they were separated from their family. So that became a real challenge for us.”

In response, HDGH redeployed staff from idle outpatient and clinic areas to help keep patients connected to their families.

Child and youth workers were assigned to the palliative care unit, helping patients transition through their final days.

And nursing students were hired to work in all units as the facility opened up an additional 72 beds for acute-care patients.

Kaffer said the pandemic revealed how well the hospital system worked in collaboration, developing a strategy more seamless and responsive to the needs of the population.

“That was one of the major system successes,” Kaffer said. “I think our system is going to be stronger, more integrated. And hopefully the lessons around patient centredness won’t be lost in the future work we do together.”