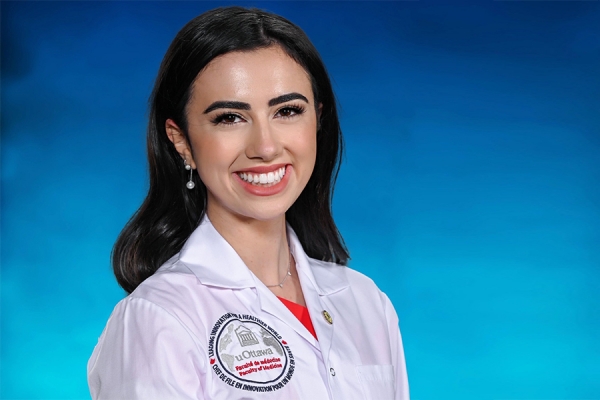 Athena scholar Aliyah King is studying medicine at the University of Ottawa.

Two former Faculty of Science students were recognized by the Athena Scholarship Program which maintains that by elevating people with potential and solid values, they will be exceptional role models and inspire others to achieve excellence.

The Athena Scholarship Fund Windsor provides scholarships to post-secondary students who excel academically, exhibit extensive community involvement, and serve as outstanding leaders while assisting girls and women to achieve a better quality of life and reach their full potential as leaders.

“Because of Science at UWindsor, I have met many mentors who have helped me develop life skills both in and outside of the academic environment,” says King.

“Because of their belief and investment in me, I was able to take part in memorable opportunities such as the Outstanding Scholars Program, the Ignite Work Study Program, and student clubs which have led me to my chosen career path in medicine.”

King advocates for the Bulimia Anorexia and Nervosa Association and the Canadian Mental Health Association, helps lead a healthy lifestyle initiative for girls in Grades 7 and 8 called Girls in Motion, and helps run weekly recreational ice-skating lessons at both the University of Windsor and St. Clair College.

“To me, the Athena award symbolizes the importance of courage. Through courage, all Athena recipients have placed themselves in a position to be curious, identify inequities, and innovate change,” she says.

“Receiving the 2022 Athena award is an immense honour and I hope that others will feel inspired to lead courageously with the goal of enhancing the quality of life in our community.”

Vanessa Montemurri (BSc 2019) also took home an Athena award.  She completed a Bachelor of Science in biological sciences at the University of Windsor and is now in her fourth year in the doctor of medicine program at Western University’s Schulich School of Medicine Windsor campus.

Montemurri lead the Women in STEM seminar to mentor female undergraduate students interested in medicine. Her community involvement includes volunteering with WE Care for kids, Ronald McDonald house, and the children’s aid society. In addition, she helped to develop the Child Poverty Project which addresses the high rate of child poverty in Windsor. She has also conducted research projects, one of the largest being clinical breast cancer research through Schulich and WE-Spark Health Institute.

“Science at UWindsor gave me the resources and skills combined with access to professionals, that helped me reach my goals with regards to community involvement and leadership,” says Montemurri.

“It also opened the door to working in research at an early stage. I became involved in undergraduate research and the WE-Spark Health Institute through networking with my professors which was an incredible experience that only the small class sizes of UWindsor would facilitate.”

Acting dean of science Dora Cavallo-Medved says she is proud of the accomplishments of King and Montemurri: “Having worked with both Aliyah and Vanessa, I have seen first-hand how impactful their leadership has been both in the Faculty of Science and in the greater community. Moreover, they have both demonstrated a deep commitment to empowering others and are amazing role models.”