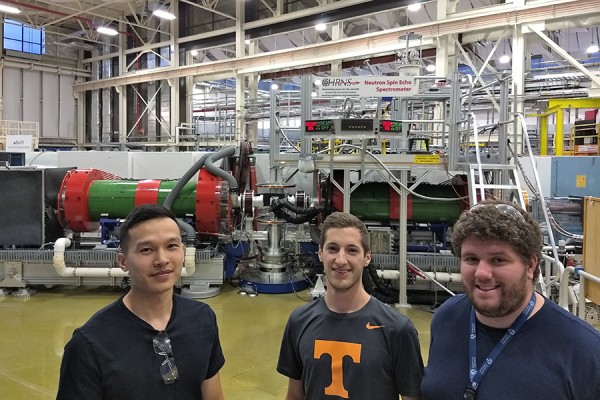 and Brett Rickeard visit the NIST Center for Neutron Research,

a neutron beam facility in Gaithersburg, Maryland. A $14.25 million

The University of Windsor is part of a national initiative to increase Canadian researchers’ access to neutron beams, with a $14.25 million grant from the Canada Foundation for Innovation (CFI) for a project called “Building a Future for Canadian Neutron Scattering,” led by McMaster University.

Neutron beams for materials research require extremely expensive equipment and are crucial to myriad fields of research, including clean energy technology, biomedicine, and the auto industry.

“This is one of the most exciting parts of the proposal, we don’t know which new materials will be discovered as a result of these new resources,” says Drew Marquardt, grant co-applicant and assistant professor in the Department of Chemistry and Biochemistry, cross-appointed in the Department of Physics.

“It’s a massive win for the scientists whose research relies on neutron scattering and it’s equally impressive for UWindsor to be a part of this project. It is important to realize that growing these resources is key to the research, but it also helps us train the next highly-skilled generation of scientists.”

Canada’s major neutron source for the study of materials was shut down in 2018. Dr. Marquardt says materials research helps create and study materials for clean energy technology, the structural integrity of reliability-critical components of vehicles or nuclear power plants, biomaterials for understanding and combating disease, and materials for information technology.

“Researchers who use neutron beams are contributing to many key areas of technological innovation that are important to Canadians — from reducing greenhouse emissions, fighting cancer and antibiotic resistance to auto parts manufacturing — just to name a few,” says Marquardt, president of the Canadian Institute for Neutron Scattering.

The CFI Innovation grant will be used for completing McMaster University’s neutron beam lab and for adding three new neutron beamlines to the Hamilton facility, as well as to form partnerships with two neutron beam facilities in the United States.

“McMaster will install a modern neutron powder diffractometer, a neutron reflectometer, and a neutron stress scanner optimized for engineering materials applications, and together, this set of five neutron diffractometers will cover a comprehensive range of key applications which benefit my lab’s research directly,” Marquardt says.

The Canadian neutron scattering community includes more than 240 scientists, engineers, and students from more than 40 Canadian institutions across eight provinces.

“It is exciting to participate in a pan-Canadian initiative like this, which includes 17 contributing universities across Canada,” says K.W. Michael Siu, UWindsor’s vice-president, research and innovation.

“This CFI-IF infrastructure will enable the University of Windsor to conduct insightful studies and exciting discoveries, as well as to train the next-generation of highly qualified personnel in the field of neutron scattering and materials science.”