The Exhausting Job of Fighting Misinformation About COVID-19 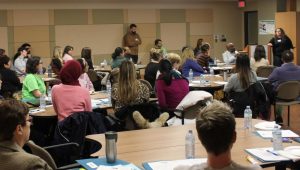 When the executive director of the WE Spark Health Institute sees misinformation online Lisa Porter admitted she feels sad.

“Right now, we have access to so much information, which is great, but in some ways, there’s almost an intent to send out information that is false,” said Porter.

Misinformation online about COVID-19 prompted the institute to hold a series of online events meant to dispel the myths and give the public access to experts dealing daily with the pandemic’s impact.

WE Spark Health Institute is a partnership of the University of Windsor, St. Clair College, Hotel-Dieu Grace Healthcare and Windsor Regional Hospital. It supports local researchers and projects.

One of the biggest targets on social media has been public health officials. As scientists learn more about COVID-19, recommendations have changed, and that has led to suspicion, and in some cases, hostility against the very experts the public relies on during a time of crisis.

“People are almost involved in a live science experiment. They are seeing the process,” commented Porter during an interview about the dangers of misinformation online earlier this week. “At the beginning, we didn’t know anything about this virus — or very little — so we had to go off the science that we had from that family of viruses. As we’re finding more out, it has to inform the direction. Things do change. That’s a process with science.”

An example of how public health recommendations have changed as scientists learn more is the use of masks to prevent transmission. In the beginning, even top doctors like the Public Health Officer of Canada, Dr. Theresa Tam, did not recommend their use. Since then, more and more municipalities are enacting bylaws mandating the use of masks in public spaces.

“It’s not because the information was wrong. It’s because we didn’t have the information,” said Porter. “People have to know the people working on this have a tremendous amount of expertise. They’re approaching a problem that none of knew anything about.”

“I think we knew from the very beginning that if we handled this correctly and we don’t see the number of cases, that people are going to doubt things,” she continued. “But, the virus is very real.”

She confessed the lack of trust from the public could be demoralizing.

Despite an uptick in the number of new cases in recent weeks as the economy reopens, Canada has been spared the level of infection seen in other countries.

As of Thursday, the global case count was 15.2-million. The U.S. had 3.9-million confirmed cases of the virus, the most in one country, while Brazil was second with 2.2-million. India, one of the most populous countries on the planet, was third with 1.2-million cases. By comparison, Canada had a total caseload of 112,240. Of those, 87 per cent are resolved.

“I think because we’ve been able to stay in front of it more — that almost has created more misinformation because people don’t believe that it is as bad as it actually is,” said Porter.

“We’ve seen so many people say, ‘oh, this is no worse than the flu.’ Maybe if you don’t see it yourself, maybe it’s a little bit easier to see the misinformation,” Porter added. “You do worry about the second wave.”