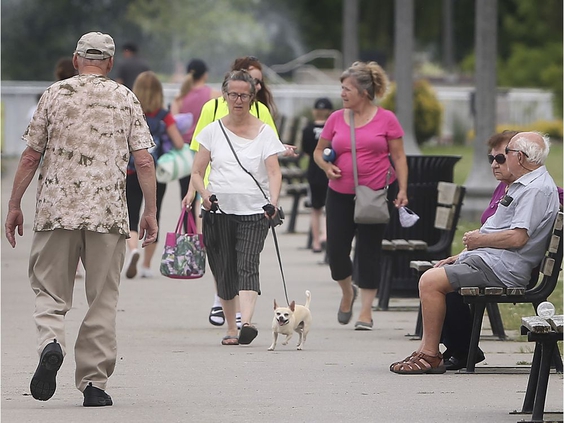 More space, please. People enjoy the sun and the outdoors at Reaume Park in Windsor on Friday, June 26, 2020.

Participants of a webinar on Friday envisioned a post-pandemic Windsor with more shared public spaces to walk and relax.

More than 100 days into a pandemic that has fundamentally changed the ways most people live and work, 17 local voices offered their thoughts, ideas and suggestions Friday on how Windsor might move forward to succeed and prosper as a community.

“Really, there’s never been a better time to experiment … to think outside the box,” downtown businessman Bryan Datoc said during a Zoom webinar hosted by the University of Windsor law faculty’s Centre for Cities.

The thoughts came fast and furious from a wide diversity of voices, each given only several minutes to speak. Working in the service sector (Craft Heads Brewing Co.), Datoc said that, whatever directions are decided, city hall and leaders must adopt a collaborative, problem-solving approach “rather than just say no” — and they must be willing to “move swiftly.”

A number of speakers emphasized the need for Windsor to exploit one of its greatest strengths — diversity — and to engage and involve more of its minorities, like Black and Indigenous people, and the city’s vulnerable people.

Windsor is one of the most multicultural cities in Canada and has a “gold mine” of talent and skills among its newcomers, but that they are “grossly under-utilized,” said Hugo Vega, a regional manager with the YMCA.

Real estate agent Deidre Ritsche said her firm, Border City Living, works with those wanting to flee bigger cities, as well as former Windsorites wanting to return, and what’s “huge for us are walkable neighbourhoods.” Clients, she said, are “amazed at how bad the public transit is … we have a hard time placing them.”

Ritsche said the younger people she deals with have ideas and want to get involved.

Lyra Sheldon is a 17-year-old who just graduated high school and about to embark on studies at the University of Ottawa. Young Windsorites, she said, pay attention to what their city is doing, and those actions will influence where they eventually decide to settle. She said they want “more green areas for families,” good public transit and strong arts and culture — “a more vibrant and liveable Windsor.”

Imam Yousef Wahb said the local Muslim community would like to see more bike routes and lanes so they can bike and walk safely to Windsor’s five mosques, four full-time schools and other public gathering spots. Currently, Windsor is “underserved a lot” in that regard, he said.

Dealing with COVID-19 and a provincial health emergency, “stress is at an all-time high,” said Sarah Woodruff Atkinson, a University of Windsor faculty of human kinetics researcher. With community centres, arenas, gyms, playgrounds and sports fields all closed, she said “the most common form of recreation is walking,” but Windsor’s trails “often lead to nowhere or connect to busy streets.”

Unlike what’s happening in other cities, with streets opened to more active forms of transportation, she said Windsor’s mayor and council shot down a similar proposal for lanes along a stretch of downtown Riverside Drive.

Vega and others spoke of the need for more public spaces and for leaders to simply observe who uses them. He said “most users” of the riverfront are newcomers.

“There has never been a better time for city-level innovation, and it has never been more important to have truly representative voices at the table when decisions are being made,” associate law professor and Centre for Cities director Anneke Smit told the Star.

Intended as just the start of a local dialogue, ‘Windsor and the Post-Pandemic Healthy City: A Community Conversation’ can be watched in full by visiting the Windsor Law Centre for Cities website.