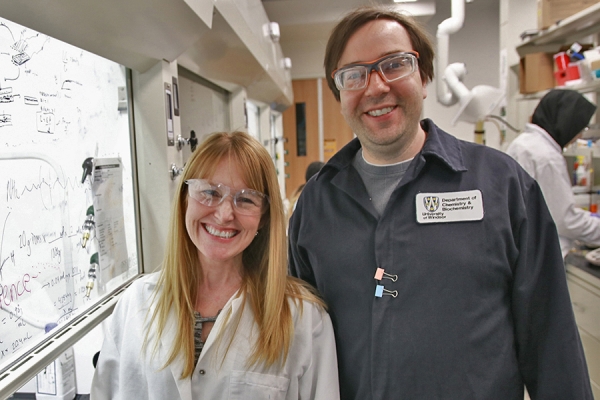 Lisa Porter and John Trant, shown in this 2019 photo, have received funding

to devise new imaging agents for the diagnosis of prostate cancer.

A pair of UWindsor scientists are researching ways to better diagnose prostate cancer.

Lisa Porter and John Trant are developing imaging agents to help oncologists distinguish between different types of prostate cancer. The new agents would fluoresce under near-infrared light that could be used in conjunction with colonoscopies. Diagnoses would be more precise and wait times shorter than with current imaging using positron emission tomography, commonly referred to as PET scans.

“What’s cool about this is you could just use a lamp,” said Dr. Trant. “This would be much more readily available, and we could cut costs a couple orders of magnitude.”

The research is being funded with a $30,000 grant from the Windsor Cancer Centre Foundation’s Seeds4Hope program. Since its inception in 2009, Seeds4Hope has awarded $2.3 million to cancer research projects.

According to the Canadian Cancer Society, about one in nine Canadian men will develop prostate cancer during their lifetimes. Last year, more than 23,300 Canadians were diagnosed with prostate cancer. About 4,200 will die from it each year.

“The mortality numbers are lower than they used to be, as survival has significantly improved thanks to the development of both targeted therapies and prostate-cancer-specific imaging agents,” Dr. Porter said.

But the imaging could be vastly improved.

Prostate cancer generally begins as hormone-sensitive adenocarcinoma, a disease treated by reducing the body’s production of testosterone and other hormones. But the cancer can evolve and become resistant to the treatment. A second line of therapy can be used, but the cancer can evolve further into an even more aggressive form.

“Our project aims to develop a pair of probes that can distinguish between prostate cancer that is hormone sensitive and prostate cancer that has become treatment resistant,” Trant said. “It can also help determine if a cancer is progressing from one stage to another.”

Trant and Porter are experienced cancer researchers who have collaborated on projects tackling the most aggressive forms of the disease. Their research has been funded by provincial and federal agencies, as well as local ones.

“We’re thankful for the Windsor Cancer Centre Foundation and all its generous donors who give to the Seeds4Hope program,” said Porter. “The program continues to support cutting-edge research right here in Windsor-Essex.”