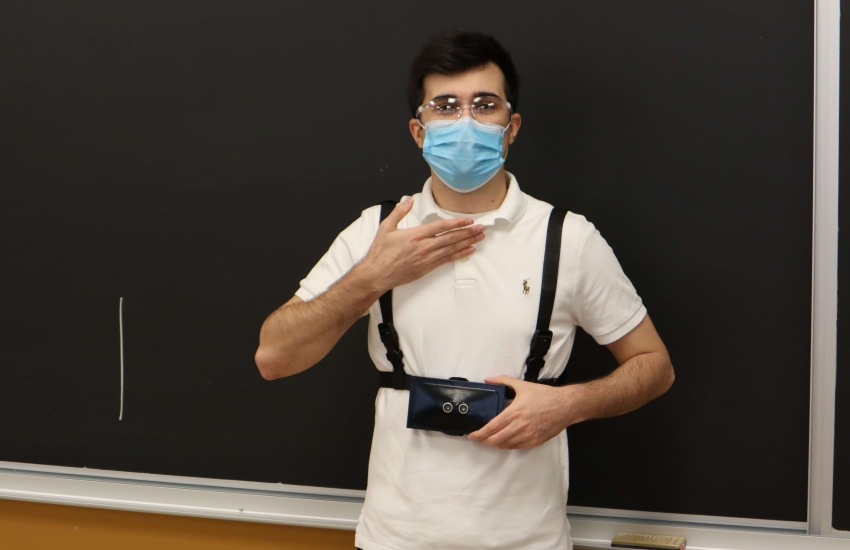 Bryce McGregor, a graduating student from the Biomedical Engineering

Graduating Biomedical Engineering Technology students have created a device which detects objects in the immediate walking path of a visually impaired person.

The customizable and wearable harness consists of a clip-on ultrasonic sensor which sounds an alert when the person wearing it is approaching a mass. It was designed to take the place of a white cane or walking stick.

Instructor Jim Durocher said for their year-end capstone projects, the students were told to consider a disease or disability and improve the quality of their life.

“These are more ambitious and higher risk projects. With ambitious projects you’ll often encounter many roadblocks.”

But this is the nature of the course said Durocher.

“How are you able to adapt around the roadblocks and course correct when something detrimental occurs? To their credit these students have done really well with that.”

Due to the Covid-19 pandemic the students were only allowed to be in the lab one day per week but were able to work online together using Microsoft Teams.

Graduating Biomedical Engineering Technology student and group leader Bryce McGregor said the time was used to make sure they were all on track so they could get right to work when they were in the lab.

The unit makes a series of three beeps alerting the person how far they are from objects as they approach.

“The first alert sounds at a one metre distance, the second at half a metre, and the third at roughly a quarter of a metre.”

The most impressive part of the project is they did it all on a budget of $150, but only spent $129.

McGregor said the group was very fortunate to have the budget, but they would need additional money to make the final product more accurate and professional.

“With the time and budget we had, we’re happy with what we created.”

If given more time, some of the improvements the group would like to make include waterproofing the sensor, eliminating the audible alarm in exchange for a silent buzzer, and adding more sensors to cover a 360-degree radius.

McGeen said it works like sonar, the ultrasonic transducer sends out a wave which hits a large mass and bounces back to the receiving end the of the unit.”

The goal was to beat out the walking stick because everybody is comfortable with it and knows how to use it.

“This would actually be great to add (sensors) to the stick and work in unison with the harness.”

Durocher said he has seen his students grow through this and flourish in situations where he thought they might not have.

“They have surprised me with their ingenuity and I am very please with the results.”

Other final products included a manual ventilation device for people who are in a steady state but need assistance breathing, and pads that will reduce bed sores by lifting immobile patients and adjusting their position over a time frame while alleviating pressure points.