The Year of COVID 2: WRH CEO reflects on one year with COVID 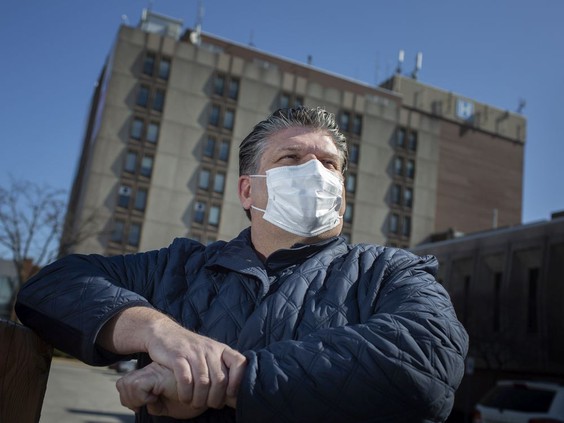 Engraved into a small metal paperweight, Winston Churchill’s words have pressed into the palm of Windsor Regional Hospital’s CEO over the last 12 months, motivating him to move forward as the COVID-19 pandemic threatened patients and staff at every turn.

David Musyj has had the solid, flat square for two decades. But the pandemic has made him lean on the message more than ever.

Reflecting on how the hospital has dealt with a public health crisis unlike any other in the last century, the 53-year-old said while he and his team are fatigued, there would be plenty of time to rest when the pandemic is over.

“For the last year, there have been many a day when I’ll either get an email or text at three or four in the morning, or I’ll be sending an email at three or four and the other person responds,” Musyj told the Star.

“It’s because we have to be ready. We’re thinking about what do we need to do to make everybody safe?”

Those potentially life-or-death conversations began in January 2020, when COVID-19 cases stemming from the spread in China began to pop up in other countries. Anxieties at Windsor Regional Hospital were then at their peak until Windsor-Essex recorded its first case in March. 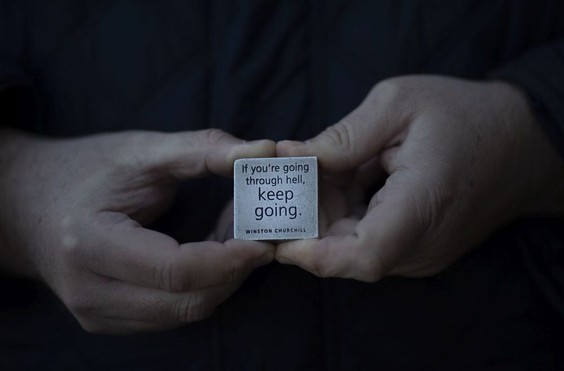 March 5, 2021, holds a small paperweight with a quote from Winston Churchchill

that he has been holding onto throughout the pandemic. PHOTO BY DAX MELMER /Windsor Star

Since then, the region has withstood massive outbreaks among the county’s migrant farm worker population, as well as in schools, homeless shelters, and workplaces. Some long-term care and retirement homes have been nearly decimated by the virus.

Residents and businesses have endured multiple lengthy lockdowns that threatened livelihoods and mental health. Bars and restaurants were often off limits. Caesars Windsor has remained shuttered for a year.

The Windsor-Detroit border closure that began almost exactly one year ago has kept loved ones on either side apart. Although the COVID-19 vaccine rollout is underway, those who can meet are told to stay two metres apart. Roughly 400 people died of COVID-19 before they could be inoculated.

The hospital’s top dog has worn many hats during the pandemic. As CEO, Musyj has virtually attended hundreds of meetings and united colleagues and community partners to make critical decisions in a flash.

He served as a courier in November, his dual citizenship allowing him to cross the border, which has been closed to non-essential travelers since March 19 of 2020, and retrieve an urgently needed medication for a Windsor patient from the University of Michigan Hospital in Ann Arbor. He had to self-isolate for two weeks when he returned to Windsor.

hen his 82-year-old mother was hospitalized, though not with coronavirus, he was a concerned relative unable to see his family member because of Windsor Regional’s tight visitor restrictions. At one or two community locations where remote COVID-19 testing was necessary, he even did the paperwork while health-care workers administered swabs.

Rewind to before COVID-19 landed in the region when Musyj and the hospital team looked at their pandemic plan. The tabletop pandemic exercise they’d done in the previous two years happened to be in anticipation of a novel coronavirus outbreak, “so we were prepared,” he said. They sent out a memo to staff informing them what symptoms to watch for in the emergency department.

In February, Musyj ordered signs from a printing company to indicate designated entrances and exits, something the hospital had scrambled to do during the SARS crisis of 2003, back when he was Windsor Regional’s lawyer.

“We always knew from an infection control point of view that it was just a matter of time that this was going to happen,” he said. “They knew this was coming, they just didn’t know when.”

"It’s not overconfidence, but their training, their education, their preparedness kicked in."

Staff were fraught with questions about what was to come. COVID-19 had already devastated other parts of the world. Media reports from Italy showed overrun medical facilities and lines of army vehicles called in to take away the dead. Health-care workers from Windsor-Essex employed in Detroit spoke of people walking into emergency departments and dropping dead moments later.

“By the time the first case came around in the middle of March, we were ready to go. But it was high anxiety.”

On March 20, Windsor-Essex had its first COVID-19 case confirmed. Three days later, an 82-year-old Bob Trudell arrived at a Windsor Regional Hospital emergency room drained of energy and coughing, pneumonia rattling his chest. Once admitted, he would unofficially become the hospital’s first COVID-19 patient, though he did not test positive for a few days. In the meantime, on March 24, an infected woman in her 60s who had been swabbed the day before was admitted for treatment.

“Sure enough, when we had our first cases, I went to the floor both at Ouellette and Met and met with the staff. They were literally cool as cucumbers. They were like, ‘We got this. We know what to do.’ Ever since then, it’s been like that.

“It’s not overconfidence, but their training, their education, their preparedness kicked in. They’ve never skipped a beat since then.”

While he was never surprised by their ability to rise to the challenge, Musyj said he’s in awe of and proud of the hospital’s staff.

Since then, Windsor Regional has swabbed nearly 100,000 people at its assessment centres, admitted more than 800 COVID-19 patients, and tended to 300 others who tested positive in the emergency department.

Of the roughly 13,500 local residents who have tested positive to date, more than 1,100 have attended Windsor Regional.

“Are we fatigued? For sure. But you have to be. That’s the price of leadership,” Musyj said.

He considers every hospital employee a leader. Other members of the community are looking to them for guidance on how to get through these unprecedented times, he said. He told them as much during a speech to staff early in the pandemic, and they haven’t disappointed.

Few moments appear to have shaken the hospital CEO. But one of them was finding out he regularly sat in the stands at University of Windsor men’s baseball games with the first local COVID-19 patient, Trudell. Musyj’s son, Max, plays for the Lancers with Trudell’s grandson, Jacob.

Trudell lost his life to COVID-19 on April 9.

When he learned from Trudell’s daughter, Pam Prsa — who Musyj also regularly said hello to at baseball games — that Trudell was dying in hospital, “it really hit hard,” he said.

“The world got really small really fast. It’s tragic that he was our first COVID-positive patient at the hospital, and it’s beyond tragic that he passed away.”

When his own 82-year-old mother, who lives alone, told him a few months ago that she doesn’t “want the last few years of my life to end this way,” isolated from her friends at church with whom she enjoyed making and selling cabbage rolls pre-pandemic — “That’s tough to hear,” he said.

When Windsor Regional admitted residents of long-term care home Heron Terrace to its COVID-19 field hospital, Musyj called each family member personally. He called them again when their loved ones were discharged, either because they were returning to the senior facility they called home, or because they’d died. He didn’t get into how hard those talks were.

"It’s the community coming together, rallying around each other, and doing everything they can to support each other."

Separately, dealing with hospital outbreaks has been a headache. In Wave One, it was clearer how someone caught COVID, Musyj said. In Wave Two, contact tracing became more complicated because of the volume of cases and the adaptability of the virus. The hospital had to implement a Day One and Day Five swab system for admitted patients, because so many people with symptoms swabbed on admission had their tests coming back negative, then positive after the five-day incubation period.

Ensuring strict adherence to personal protective equipment (PPE) rules, being able to adapt quickly to ever-changing provincial regulations, and making decisions on a dime, like cancelling non-urgent surgeries in the face of a potentially critical shortage of acute and critical care beds — none of it has been easy.

Despite the challenges, the painful conversations, and the lives lost, Musyj said the pandemic has resulted in some good.

It forced the hospital and its partners to quickly make decisions that may otherwise have taken much hemming and hawing over multiple meetings. It also united the community in unprecedented ways, with partner agencies stepping in to help at a moment’s notice.

Windsor Regional asked to use the St. Clair College SportsPlex as a field hospital on March 28 and had full access to the facility on April 1. Ten days later, the field hospital was up and running with a generator from Caesars Windsor. Local company Lester Construction built the hospital for the cost of the lumber.

“It’s the community coming together, rallying around each other, and doing everything they can to support each other,” Musyj said. “It’s quite amazing.”

The pandemic also sparked a more regional approach to health care. Windsor Regional is now sharing ideas and best practices with Ontario hospitals as far up as Hamilton on a daily basis. Before COVID, Musyj said, he used to interact with his counterparts at some of those hospitals every three months.

As a result of COVID-19, Windsor Regional has begun offering same-day surgeries for some procedures, like hip, knee, and shoulder surgery, that used to require patients to stay in hospital for multiple nights. That change means more surgeries can be performed without taking up inpatient beds, and people can safely return home sooner.

Looking to the future, Musyj said the hospital will have COVID-positive patients for some time. Though a few cases might resolve each day, a few patients also arrive — it’s the new normal at Windsor Regional.

For the general population, that new normal will likely include wearing masks for a while longer, he said. Group activities will change, with the duration of vaccine immunity still unknown.