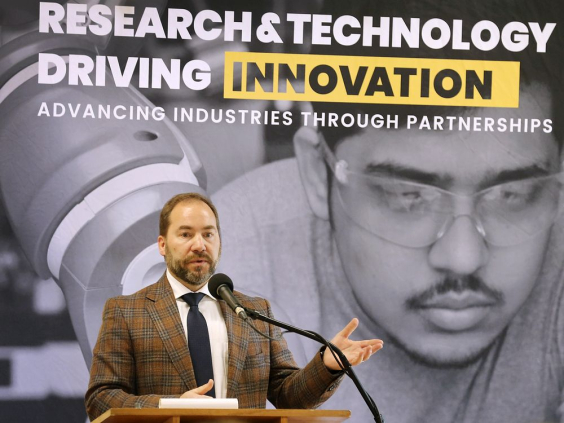 Peter Wawrow, director of Applied Research and Development at St. Clair College, speaks during a news conference on Friday announcing that the college is the second Canadian post-secondary institution to become “5G-ready. Dan Janisse / Windsor Star

St. Clair College is ready for the technological future.

Areas of the school’s South Windsor campus now equipped with the high speed, low latency fifth generation of mobile broadband network known as 5G have the capacity to house autonomous vehicle testing, among other things. As the second Canadian post-secondary institution to become “5G-ready,” college representatives say local students and industry will have a leg-up when the new network goes live nationwide in the near future.

“It feels like we’ve been building towards 5G for years and years,” said Ben Cowan, manager of wireless access engineering with Telus, during a presentation of the network at the college on Friday. Telus invested roughly $250,000 to implement 5G (fifth generation) infrastructure at St. Clair’s Ford Centre for Excellence in Manufacturing and Centre for Applied Health Sciences buildings. He anticipated 5G would launch more broadly in Canada before the end of 2020.

“Five-G is more transformative and more transformational for industry, for the consumer, for health care, for agriculture, than any other technology we’ve seen since the beginning of cellular communications,” Cowan said.

Not available for connection by the general student population, St. Clair’s 5G network will be used for educational and experimental purposes by classes and community partners. Using a $60,000 automated guided vehicle (AGV) purchased by the college, a student on Friday demonstrated how, when connected to the fast network, the small wireless machine moves instantly in time to mirror the movements of a nearby computer mouse. Students and faculty plan to program the AGV, which has sensors to avoid collisions, to carry objects inside lab settings and around campus.

Health sciences simulation equipment will also use the 5G network to operate efficiently without interference from other devices at the college, something that can be an issue in hospital settings where many machines function simultaneously.

“It gets us ready for the ultimate deployment of 5G across the country,” said Peter Wawrow, director of applied research and development at St. Clair College. “It’s a practice facility, and we have the ability now to test out other 5G technologies within this space so that when it does get deployed, we can hit the ground running with companies that are working with us.”

Keval Patel, a data analytics student at St. Clair College, maneuvers an autonomous guided vehicle during a news conference on Friday announcing that the college is the second Canadian post-secondary institution to become “5G-ready

Cybersecurity is another issue the college plans to investigate through the new network, Wawrow said.

“If we can have this 5G network here (at the college), we can be sure when we go out into the real environment we know we’re safe in terms of security issues,” Wawrow said.

The University of British Columbia became the first 5G campus in November after it partnered with Rogers to fully outfit its facilities with the wireless technology and create a network test bed for related research and innovation.

“The need for 5G is not really a today problem. Rather, it’s more of a tomorrow challenge,” Cowan said.