The staffing crisis at Heron Terrace long-term care home in Windsor during the pandemic’s first wave last spring was so dire that at one point only three employees showed up to care for 140 residents.

It took so long — five days — to get residents’ test results that Windsor Regional Hospital began labelling residents as hospital patients to get the results faster.

These revelations are contained in a transcript of Windsor Regional’s testimony before Ontario’s Long-Term Care COVID-19 Commission on Nov. 19. The transcript was released Monday. The commission released its second interim report Friday.

The hospital was asked to testify about using its field hospital in the St. Clair College SportsPlex to care for and cohort long-term care residents infected with the virus.

With more than 100 outbreaks in long-term care and retirement homes in Ontario in the last six weeks, including six in Windsor and Essex County, and 300 more deaths, Premier Doug Ford said last week the government is considering field hospitals to help care for and cohort residents and cited Windsor as an example.

“We have a great field hospital in Windsor,” he told the daily briefing. “Definitely we’re looking at it. We’re considering it.”

The government’s comments came after it was pressed on the issue in the legislature last week. Long-Term Care Minister Merrilee Fullerton acknowledged that ward rooms in long-term care homes “are a real problem.”

NDP MPP John Vanthof responded, “(Use) field hospitals or rent hotel rooms or do something … Come up with a plan.”

Heron Terrace residents were moved to the field hospital in April after a crippling outbreak and staff shortage.

The day that only three staff showed up, the home was able to get immediate, temporary help, “but that was incredibly alarming,” John Scotland, CEO of Steeves and Rozema Group, which owns Heron Terrace, said in an interview.

The field hospital was initially planned for additional capacity if there was a surge in COVID-19 patients in Windsor Regional, the designated COVID-19 hospital here. But the surge happened in long-term care homes, and the province asked hospitals to help the homes deal with the outbreaks.

There has been debate about whether long-term care residents, many suffering dementia, should be moved.

Moving them is risky, Musyj acknowledged to the commission, but he said, “I’ll be blunt. They’re going to die in place. The goal here is to survive.

“That’s no disrespect to the long-term care home,” he said. “Some just can’t do it. It just starts unwinding so quickly.” 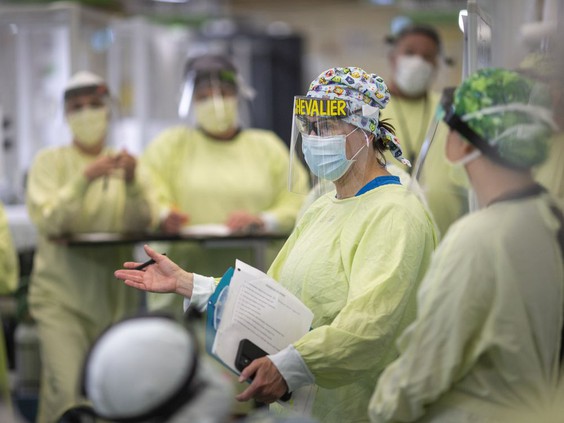 Field Hospital at the St. Clair College SportsPlex, during the COVID-19

Dr. Marguerite Chevalier, lead physician for the field hospital, told the commission, “I’ll be honest with you … had we not moved them, that whole facility would have been infected.”

“At one point,” she said, “it felt like we were in a sinking ship because we could not get them out of outbreak.”

The purpose of the field hospital was to take infected patients out of the home to prevent further spread, Musyj told the commission.

“Our theory is if you have five positives in long-term care, you’ve technically got ten. You’re chasing your tail at a certain point. Especially in a lot of these facilities, there’s no way they can cohort safely in place.”

Said Chevalier, “Once it (the virus) gets into a home, it’s like wildfire without the proper help.”

The commission in its interim report repeated that infected residents should have the option to transfer to alternate settings to prevent further virus spread and help them recover.

Homes “should be required to work with their hospital, public health partners and others to put plans in place to quickly decant residents to other facilities, where necessary,” the report states.

“It prevented further spread,” he said. “It meant that those with COVID (at the field hospital) and those at the home got the best care possible.”

Most universities and colleges have facilities like the SportsPlex, Musyj told the commission. They’re provincial assets, and they aren’t being used during the pandemic.

The transcript contained numerous interesting revelations. All tests from here were going to Toronto in April. It took five days to get results.

“In the meantime, the virus was just replicating in the long-term care homes,” Chevalier said.

“I remember … being so frustrated … I said … we need to put them all through the hospital…make them as if they’re a hospital patient because we could get priority in the broken system.

“And that did…swing the tide a little bit.”

Some personal support workers in long-term care homes wore the same pair of gloves to care for multiple residents, Chevalier told the commission.

“They didn’t understand infection control because that’s not been a big focus of their training,” she said.

Local hospitals have since paired with long-term care and retirement homes to help with infection prevention and control and outbreaks.

Asked why long-term care staff weren’t showing up for work, Chevalier said some had been infected “but most of it was fear.”

They saw what was happening in New York and Detroit. They didn’t have proper personal protective equipment or know how to use it.

“They were scared. They thought, ‘I’m not getting paid enough to do this.'”

Even at Windsor Regional, before the hospital admitted its first COVID patient, “you could feel the palpable anxiety from staff,” Chevalier said.

One doctor’s husband made 3D printed shields because the hospital didn’t have any yet.

Musyj and Chevalier testified for 90 minutes.

Windsor Regional’s 100-bed field hospital was the first to open in Ontario and is believed to be the only one used for long-term care residents. It cared for 52 residents between April and June.

Windsor Regional has received many calls in the last month from provincial and municipal officials asking how the field hospital was built and operated.

“There is a lot of interest across the province,” Musyj said in an interview.