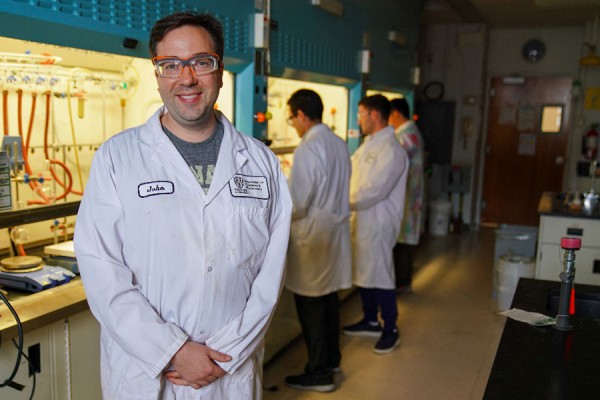 Biochemist John Trant is heading up a research team

exploring the behaviours of disease-causing proteins.

A team of UWindsor scientists will use a multifaceted approach to explain the basic behaviours of disease-causing proteins, in an effort to advance the understanding of why a Canadian biopharma company's cancer-fighting drug is proving successful in clinical trials.

Cotinga Pharmaceuticals developed a drug that targets and repairs specific proteins found in many cancers. To understand precisely how the drug and the proteins interact, as well as how the drug can repair their functions , the UWindsor team will use a combination of computer simulations and X-ray crystallography to capture “pictures” of the drugs’ actions-in-motion with the proteins.

“This five-year project will not only advance Cotinga's science, but it will also help us better understand how drug molecules, in general, are able to help misfolded proteins regain their proper shape, how proteins fold, and why proteins interact with other proteins the way that they do,” says Dr. Trant. “This is bigger than anything we've taken on previously.”

The research team will also draw on the expertise of biochemistry professor Yufeng Tong and biomedical sciences professor Lisa Porter. Trant says the project’s major strength is the collaboration of the three researchers with different skill sets and varied research techniques.

“Dr. Tong is a world expert in X-ray crystallography, which he uses to take accurate snapshots of these proteins. Dr. Porter is renowned for her cancer research, especially the role of gene expression in cancers. And my lab has state-of-the-art computational modelling capabilities to model the flexible protein in motion,” says Trant.

“I couldn’t have better colleagues to address this specific challenge, and we are excited to deepen the ongoing integration of our labs’ efforts.”

Cotinga’s drug targets one protein in particular, which is called p53 — the guardian of the genome, the master of gene expression, and also one of the most mutated proteins in cancers. When working normally, it helps to restore normal cellular function in diseased cells. When p53 is mutated, it stops doing its job properly and goes rogue, which leads to uncontrolled growth of cells and ultimately causes cancer.

Trant says despite decades of studies on the incredibly complex p53 network, and the availability of the details of its individual parts, no one has ever seen a clear picture of the whole protein and no one knows how to rein it in when it goes rogue.

“We have a partial picture of p53 — which is essentially two ball bits that crystallize nicely with these spaghetti-like strings hanging from them,” he says. “It is very flexible, and to make matters more complicated, it likes to almost always dance in a complicated group of four around a common DNA maypole.”

There are currently only static X-ray images of p53, but still pictures can’t take into account the continual motion of these proteins. Trant says to determine how the drug interacts with p53, the team will investigate a host of possibilities, including protein folding, protein degradation,  and modelling the flexible protein in motion.

Dean of science Chris Houser says collaborating with the company’s clinical researchers could form the basis for a new model for industrial-academic collaboration between small pharmaceutical companies and academic researchers.

“This project consequently advances the economic interests of a Canadian company, assists in providing exceptional multidisciplinary training to the students and postdoctoral fellows working on it, and prepares them for employment in the chemical industry,” Dr. Houser says.

Trant says this initiative gives the team of researchers and their trainees, led by Farsheed Shahbazi, Maryam Kosar, and Azam Mohammadzadeh, an opportunity to unravel the mysteries of p53.