Walking through a pandemic — study shows people are stepping up

Jory Fulcher, a masters student in human kinetics at the University of Windsor,

walks down her street in South Windsor, Thursday, September 25, 2020. Fulcher

When the pandemic pounced on Windsor in the spring, almost overnight the time spent on physical activity plummeted and the time spent vegging out in front of TV and smartphone screens shot up.

But then something unexpected happened amid all the sedentary self-isolating, according to a University of Windsor study just concluding.

The homebodies began moving, and we started walking — a lot. 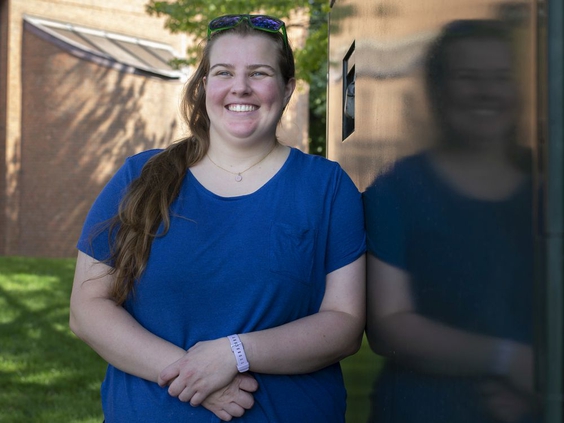 Emily Stadder, a masters student in sports management at the

University of Windsor, one of the participants in a study tracking

walking levels during the pandemic, has seen her daily steps

Staying physically active became a challenge when gyms and fitness clubs, organized sports, and exercise programs all shut down or were severely curtailed, and people were urged to physically distance and avoid engaging socially.

I’ve seen a large uptick in the number of people walking, especially in my neighbourhood.

Woodruff and doctoral student and study co-leader Paige Coyne found a ready source of subjects to track — more than 130 users of Fitbit, the wristwatch activity tracker that counts the steps the wearer takes. Bonus: the researchers were able to look at activity levels before and after the the start of the COVID-19 health emergency.

No surprise, perhaps, was the big dip noticed in activity at the immediate start of the pandemic, with the average of about 9,000 steps taken per day shrinking down to 8,000 steps. Participants range in age from youngsters to seniors, but Woodruff said the bulk of the study subjects are “middle-aged women” and mostly from Windsor and Essex County.

The biggest surprise, however, is that walking — easy, cheap, accessible to all — appears to have taken off, with the September daily average of the 75 participants who have made it to the six-month point reaching 10,000 steps. Woodruff said the study volunteers didn’t think we’d still be in the thick of a global pandemic half a year later.

“I thought it would be three months max — and here we are, the whole summer gone,” said Emily Stadder, one of the study subjects who is now averaging about 10,000 steps a day, a figure almost 3,000 above her walking level a year ago. When COVID hit, she lost her access to gym and exercise facilities, “my amount of activity went down … my motivation went down,” said the 24-year-old University of Windsor sports management masters student.

Emily Stadder, a masters student in sports management at the

University of Windsor, is pictured with her Fitbit outside

Windsor study on walking during the pandemic.

Stadder and other study participants noticed they didn’t just lose out on organized recreational opportunities but also on the many regular day-to-day physical activities, simple tasks like walking to class or even just to the car and back.

“I spend a great deal of time in front of the screen, the majority of my day,” said Woodruff, who researches the health and wellness of Canadians. With university classes now limited to online offerings, she said her workspace, kitchen and bathroom are all located just steps apart.

“We don’t have that commuting, the walking to the car, the walking down the office hallway to talk to a colleague — we need to be conscious that we’re not having that incidental movement anymore,” she said.

Jory Fulcher said the first month after March break when schools and businesses were shut down was the worst and that she had to make an extra effort “to get in some movement.” Pre-COVID, the 23-year-old human kinetics masters student took bootcamp cardio and strength training classes and attended hot yoga sessions. But that stopped, as did her part-time retail job at Devonshire Mall.

Jory Fulcher, a masters student in human kinetics at the

University of Windsor, is pictured outside her home in

track her walking for a University of Windsor study on

walking during the pandemic.

“It really sank in how sedentary my life had become — it was embarrassing,” said Fulcher. Pre-pandemic, she was averaging about 5,000 steps a day but that average sank in March to “probably 2,500 steps a day.” What motivated her to get up and outside, she said, was seeing others becoming active.

“Totally — so many people were out there, walking dogs, on their bikes, running, rollerblading,” said Fulcher, who now averages over 10,000 steps a day.

Stadder, Fulcher and Woodruff all see more people out walking than they’ve ever seen in Canada’s automotive capital. “I’ve seen a large uptick in the number of people walking, especially in my neighbourhood,” said Stadder, who lives in Forest Glade.

The University of Windsor study included monthly online updates to participants and the public, including tips on walking and responses to survey questions.

The University of Windsor study included monthly online updates to participants and the public, including tips on walking and responses to survey questions.

Woodruff said she was surprised at the high number of respondents who expressed satisfaction with Windsor’s outdoor offerings for walkers and other forms of active transportation, but the researchers still have to reconcile that response with an equally high number who feel the city needs to do more to expand those offerings.

The City of Windsor is challenging everyone else to join the movement with Walktober through the next month.